I originally wrote this novella as a short story while on a writing retreat at Looe in Cornwall. It was inspired by Alan Garner’s ‘Thursbitch‘ – one of my all time favourite books. Like ‘Thursbitch’, which is a real place in the Macclesfield Forest area of Cheshire, the setting for my tale was originally the remote cliffs of the south west coast of our beautiful island. However, on moving back to Saddleworth years later (the land of my birth) I stumbled on Bramley Cottage high on the ridge above Dovestone Reservoir; an ancient ruin that had long since passed from memory. I remembered my story of the old witch on the Cornish cliffs and felt compelled to change the setting and greatly expand the story. Here is the result with the cover of the book showing the famous Trinnacle rock stacks on Ravenstones Brow. 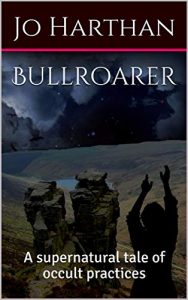 Following Jayne’s death in a vicious attack, her father suffers a similar fate in mysterious circumstances. Jayne’s sister, Rebecca, is left to seek answers; after all two burnings in one family can’t be coincidence.
This is a tale of ancestral dabbling in the dark arts and the price future generations pay when they too are drawn into occult practices for personal gain. Opposing them is the ancient magic of Mithras that cares nothing for right or wrong, good or evil, it strives only for equilibrium in a world that is out of balance. Amy, Rebecca’s best friend since school, is an unsuspecting pawn in this spiritual warfare. At first ignorant of her destiny and of the wider implications of her actions, she at last comes to understand her role in this universal game of cat and mouse. The world hangs on a thread and it is up to Amy to right the wrongs of generations and restore balance to the world.