The idea for this book came from a ghost hunting evening at Standedge Tunnel in West Yorkshire. To be honest, the evening was a little disappointing as we were expecting to be taken into the tunnel where surely there would be a multitude of ghostly goings on. Sadly, we were confined to the visitor centre and the grounds outside. Nevertheless, I did capture one or two orbs on camera and we were given the opportunity to use some of the equipment brought by the psychic investigators who were leading the expedition. Also, while there, we were advised to download the recommended ghost detecting App, which I have used to great effect during the writing of this book. Be assured, there are certainly more things twixt Heaven and Earth than this world dreams of.

Which brings me to Abaddon; the demon in my story. Early on in the writing of this book I decided that my demon, with the imposing black beard, should have a name. I selected ‘Abaddon’ at random from a list of demons mentioned in the Hebrew Bible. I chose it because the harsh sounds of the consonants intimidated me and, besides, I thought it a very apt name for ‘a bad one’. On finishing the book, I accidentally stumbled on an 1801 publication by Francis Barrett, described as ‘A complete system of occult philosophy, alchemy and magic lore.’ To my horror, or joy depending on how you view demons, I was shocked to see that the illustration of Abaddon was uncannily similar to how I had described him.

I must now ask myself, ‘Did Abaddon come uninvited and write himself into my story, or did I summon him?’ And more importantly, ‘Is he still here?’ For it is well documented that such psychic intruders are all around us, seeking out every opportunity to haunt our imagination and our dreams.

I’m sure you know that it is not always easy to separate reality from the supernatural. My advice to you is that you say your prayers before you go to sleep tonight. 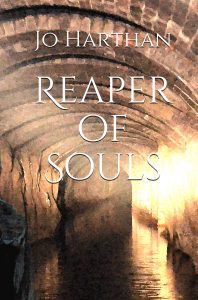 An isolated farmhouse in West Yorkshire is hiding a dark secret. So too is the nearby Standedge canal tunnel which runs for three and half miles beneath the bleak Pennine moors. How are the two connected? That’s a question an amateur group of paranormal investigators are determined to answer. Is it a simple haunting or is there something insidiously evil at work? The group discover to their detriment that it’s not always easy to separate reality from the paranormal, or psychic attachment from demonic possession. This is a supernatural/crime thriller that will have you on the edge of your seat until the very last page.